Skrimshaw, as it is spelled in Moby-Dick, or scrimshaw, as it is more widely known today, is “a general name […] for the handicrafts practiced by sailors by way of pastime during long whaling and other voyages, and for the products of these, as small manufactured articles, carvings on bone, ivory, or shells, and the like” (OED). A scrimshander, therefore, would be most commonly understood as one who practices the craft of scrimshaw. As suggested by Peter Coffin’s use of the word as a moniker to hail Ishmael (whose name he has likely forgotten as soon as heard)—“‘But wait a bit, Skrimshander; I’ve got a carpenter’s plane there in the bar’”—it would be a safe bet that a whaleman (even an aspiring one) in Melville’s day would be acquainted with the craft. Many whalemen, often employing scrap pieces of whalebone as the most readily available medium, would while away the more quiet hours at sea with scrimming (the artful whittling and carving of the bone into designs and objects). Often the products of their labor were intended as gifts for loved ones ashore: namely wives, fiancées, sisters, and mothers.

The bulk of scrimshaw specimens that survive today are domestic items, such as this magnificent collection of pie-wheels and pie-multi-tools housed at the New Bedford whaling museum: see Specimen A (pictured below).

Specimen A:
Scrimshaw pie-crimping multi-tools from the collection of the New Bedford Whaling Museum; photograph by Nicola Twilley

One of the oldest specimens of scrimshaw housed in the maritime collections at the Smithsonian is a chopper or mincer carved from the jawbone of a sperm whale, a donation by a former Secretary of the Institution, Spencer F. Baird (1823–1887): see Specimen B (pictured below) 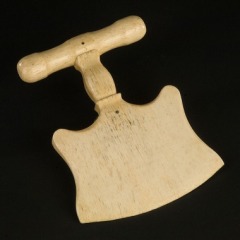 Specimen B:
Simply carved and without any engraving, this food chopper, or mincer, was made in two pieces from a sperm whale’s jawbone. Its blunted, curved blade was used to chop soft foods such as bread dough, fruits, sausage, and animal fats.
Photo and caption credit: Smithsonian National Museum of American History

Specimen C:
One of the most intimate pieces of scrimshaw a whaleman could produce was a bone or baleen busk, or corset stiffener. These were carved and given to a crewman’s loved one, who then inserted it into a matching sleeve on her corset as a unique memento of her beloved’s feelings.
Photo and caption credit: Smithsonian National Museum of American History

Specimen D:
A plaintive love poem carved on the back face of a scrimshaw corset busk.
Photo and caption credit: Smithsonian National Museum of American History

Scrimshaw and scrimshanders are mentioned not infrequently in Moby-Dick, and when they are, it is significant. The first mention occurs near the start of Chapter 3, when Ishmael reports, upon entering the Spouter-Inn, seeing “a number of young seamen gathered about a table, examining by a dim light divers specimens of skrimshander.” That he specifies there were “divers specimens” upon the table might incline us not to imagine them examining exclusively pie-wheels and corset busks. In fact, Ishmael notes the decline of whalebone corset busks in Chapter 75, “The Right Whale’s Head—Contrasted View,” while also supplying an example of the use of whalebone for an implement always in fashion:

As every one knows, these same “hogs’ bristles,” “fins,” “whiskers,” “blinds,” or whatever you please, furnish to the ladies their busks and other stiffening contrivances. But in this particular, the demand has long been on the decline. It was in Queen Anne’s time that the bone was in its glory, the farthingale being then all the fashion. And as those ancient dames moved about gaily, though in the jaws of the whale, as you may say; even so, in a shower, with the like thoughtlessness, do we nowadays fly under the same jaws for protection; the umbrella being a tent spread over the same bone.

In the previous chapter, on “The Sperm Whale’s Head—Contrasted View,” Ishmael describes the methodical removal of the sperm whale’s jawbone, which furnished the raw material for diverse specimens of scrimshaw:

In most cases this lower jaw—being easily unhinged by a practised artist—is disengaged and hoisted on deck for the purpose of extracting the ivory teeth, and furnishing a supply of that hard white whalebone with which the fishermen fashion all sorts of curious articles including canes, umbrellasticks, and handles to riding-whips.

Many sperm whale teeth were adorned by whalemen with engravings of ships and other maritime scenes. It is significant that in the first mention of the art of scrimshaw in Moby-Dick we learn that upon coming into port one of the means by which whalemen acquainted their fellows with their diverse haps at sea was to display their scrimshaw. Scrimming was not just an innocuous means of passing time or an economical means of devising gifts for loved ones ashore. It was and remains an artful mode of communication; of social communion across boundaries of status, wealth, gender, nationality, culture, and language; of historical communion across generations and centuries.

This last specimen deserves careful scrutiny. It is a rare specimen whereupon the scrimshander—who is known: he is Nantucket-born whaleman Josiah Shefield Jr. (American 1807-1880)—marked out the events of a whaling voyage aboard the Timoleon. In Shefield’s scrimshaw we see an art deeply resonate with that of Melville in Moby-Dick, wherein attention is ever-trained on the ways in which the gruff, lowly, and rude impression of the whaleman can be supplemented or even entirely eclipsed by evidence of his inherent nobility, grandeur, and artistry. No doubt Melville saw as much artistry in the unhinging of a whale’s jawbone and in the way a harpooneer coiled a rope in a line-tub, as much philosophical and poetical import in the workings of the “monkey rope,” as he would in any specimen of scrimshaw. But he would also undoubtedly empathize with a whaleman who chose to represent in his scrimming not picturesque townscapes or versified love notes to his lady waiting ashore but the then perhaps inconsequential details of a particular voyage that would prove to later generations of immeasurable historic and artistic value.