Free eBook available for download via Project Gutenberg and Googlebooks.

HTML versions of the book via literaturepage.com, americanliterature.com, and Wikisource.

Rockwell Kent’s illustrations of Moby-Dick, arranged between the late-1920s and 1930 with R. R. Donnelley and Sons, Lakeside Press, are often credited with spurring the popularity of Melville’s long-neglected masterpiece, and justly so. Today, Kent’s illustrations remain some of the most iconic representations of this famous, widely and variously drawn book. 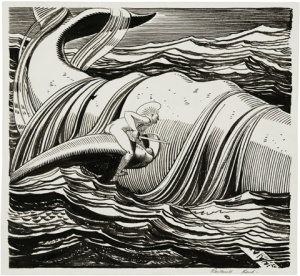 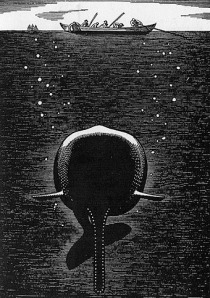 This trade edition of Moby-Dick is a reduced version of the Arion Press Moby-Dick, which was published in 1979 in a limited edition of 250 copies and has been hailed as a modern masterpiece of bookmaking. It was hand set under the supervision of one of America’s finest book designers and printers. The initial letters that begin each chapter were designed especially for this book and christened “Leviathan.” The illustrations, of places, creatures, objects or tools, and processes connected with nineteenth-century whaling, are original boxwood engravings by Massachusetts artist Barry Moser. The text of Moby-Dick used in this edition is based on that used in the critical edition of Melville’s works published by the Northwestern University Press and the Newberry Library. 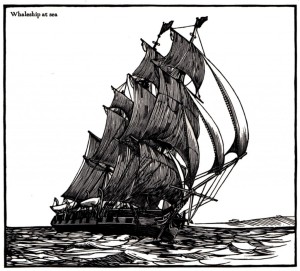 A searchable (bonus!) eText of the book via online-literature.com.

Moby-Dick Online: features include a chapter-cloud, Moby-Dick vocabulary, and (a poorly) illustrated cetology.

Check out the Moby-Dick Big Read: an ambitious and sprawling chapter by chapter reading of Moby-Dick, completed in 2013, by such luminaries as Tilda Swinton, David Cameron, Benedict Cumberbatch, Sir David Attenborough, Jenny Cuffe, and many, many others. Each chapter—available to stream or download via iTunes, Soundcloud, and Podcast—is accompanied by an original artwork.

There are also some free audiobook versions of Moby-Dick available for download via audible.com (where you must enroll in a trial membership for the audiobook to be free; otherwise the current listed price is $13.96; Narrated by Frank Muller) and LibriVox (just free; Narrated by Stewart Wills).

Inspired by one of the world’s greatest novels, Ohio artist Matt Kish set out on an epic voyage of his own one day in August 2009. More than one hundred and fifty years following the original publication of Moby-Dick, Kish began illustrating Herman Melville’s classic, creating images based on text selected from every page of the 552-page Signet Classics paperback edition. Completely self-taught, Kish refused to set any boundaries for the artwork and employed a deliberately low-tech approach in response to the increasing populari

ty of born-digital art and literature. He used found pages torn from old, discarded books, as well as a variety of mediums, including ballpoint pen, marker, paint, crayon, ink, and watercolor. By layering images on top of existing words and images, Kish has crafted a visual masterpiece that echoes the layers of meaning in Melville’s narrative. In retrospect, Kish says he feels as foolhardy as Ishmael, the novel’s narrator, and as obsessed as Captain Ahab in his quest for the great white whale. “I see now that the project was an attempt to fully understand this magnificent novel, to walk through every sun-drenched word, to lift up all the hatches and open all the barrels, to smell, taste, hear, and see every seabird, every shark, every sailor, every harpooner, and every whale,” he says. “It was a hard thing, a very painful thing, but the novel now lives inside me in a away it never could have before.” Kish spent nearly every day for eighteen months toiling away in a small closet he converted into an art studio. In order to share the work with family and friends, he started the blog “One Drawing for Every page of Moby-Dick,” where he posted art and brief description about his process on a daily basis.

Visit Matt Kish’s official website to keep up with current work of the artist, find his complete online illustration archive here, and follow his activities on Instagram.

Matt Kish’s Blog, Spudd 64, where you can find archived a drawing of every page of Moby-Dick, and follow the current activities of the artist.

Developed by counterwave labs – makers of Notakto, Hakenbush, and other games – OMBY presents the entirety of Moby-Dick as a series of 10,000 world-puzzles. For each puzzle a series of words has to be unscrambled in order to complete the sentence-length quotation from the book.

For a more complete description of OMBY gameplay visit its press page.

Read Tim Cassedy’s review of OMBY, “A Blankness Full of Meaning,” for the Los Angeles Review of Books Avidly blog.

Dick: A Card Game Based on the Novel by Herman Melville

It’s the game where meaning is plural and unstable, often with some kind of dick joke thrown in for good measure: a faithful adaptation of Moby-Dick to the form of a party game. Gather a half-dozen of your bosom friends and jointly plunge your harpoons into the ecstatic flank of delight and deliciousness. Metaphorically.

Dick: A Card Game Based on the Novel by Herman Melville comes with one or more of these optional “Dick Enhancements” for the price of $1.00: 12 additional prompts for Academics, Hamilton fans, and/or New Yorkers.

Purchase Dick and other “Moby Dickery” (stationery, t-shirts, temporary tattoos) from whysoever.com or via Amazon Prime.

Moby Dick, or, The Card Game

Game makers King Post have developed a unique card-based strategy game based on the classic work by Herman Melville. Using period images, original artwork, and custom components, Moby Dick, Or, The Card Game, provides players with endless permutations of the doomed voyage of the Pequod, and allows them to personify their favorite characters from the book. For those who haven’t read the classic, Moby Dick, Or, The Card Game creates thrilling accessibility and a one-of-a-kind game system that illuminates the great work of literature for a brand new audience.

Classic literature is made cuddly in this brand new series for children. Every classic book in the series will be condensed into 12 baby-friendly words (in the case of Moby Dick: Sailor. Boat. Captain. Leg. Mad. Sail. Find. Whale. Chase. Smash. Sink. Float.) and each will be accompanied by an photograph of beautiful and adorable needle-felted objects. Moby Dick is a high seas adventure about one man’s quest to find the whale who took his leg.

The epic saga of Captain Ahab’s obsessive quest for the white whale comes vividly to life in this three-dimensional graphic novel, the first of its kind. This phenomenal work is the creation of multi-talented artist Sam Ita, apprentice to Robert Sabuda—one of the world’s master paper engineers. There’s not just one pop-up per spread, but several, surrounded by colorful comic book-style panels that convey the story’s drama.

Here are Ishmael, Queequeq, Ahab, and of course, Moby Dick, rendered anew in a dynamic comic book adaptation of one of the greatest American novels ever written. The book also includes information about Herman Melville, facts about whales, and the history of the whaling industry. With all the flare and blaze of Melville’s original story, Moby Dick is sure to intrigue a new generation of readers with this fast-paced and electric portrayal of the famous battle between man and beast.