AntiWhale: hopes to enlighten you to the true issues behind whales. These evil, overgrown mammals have taken over the seas of humankind, according to AntiWhale, and have made suckers out of many as a shield for money hungry, overly political eco terrorists!

How to Read Moby-Dick: a guide for first-time readers. 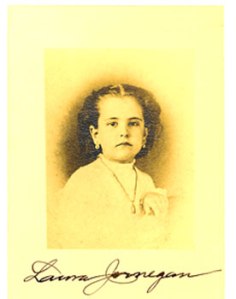 Laura Jernegan: Girl on a Whaleship: In October, 1868, Laura Jernegan, a 6 year old girl from Edgartown, Massachusetts set out on a three year whaling voyage with her father, mother, brother and the ship’s crew to the whaling grounds of the Pacific Ocean. This website, produced by the Martha’s Vineyard Museum, tells the story of Laura Jernegan and the journal she kept on her voyage. It also, through extensive and interactive photo galleries, timelines, maps, and illutsrations tells the adventurous history of whaling.

The Melville Society: website devoted to current events and scholarship of all things Herman Melville.

www.migaloowhale.org: Migaloo, the only documented white humpback whale in the world, is drawing a lot of media attention to the Queensland, Australia coastline.

MobyMap: an interactive map of all the places mentioned in Moby-Dick and the journey of the Pequod.

Nantucket Historical Association: preserving and interpreting the history of Nantucket Island and fostering appreciation of its historic significance; connects to the Nantucket Whaling Museum.

Nathanielphilbrick.com: blog, lectures, events and appearances, contact information, etc. pertaining to one of the leading historical authorities on Melville, Moby-Dick, whaling, Nantucket, and much more.

Pacific Whale Foundation: protecting our oceans through science and advocacy.

The Plough Boy Journals: documenting aspects of early 19th century American whaling by linking original and third-party documents on topics noted in the two journals kept by Lewis Monto between 1827 and 1834.

Sea Shepherd: Established in 1977, Sea Shepherd Conservation Society (SSCS) is an international non-profit, marine wildlife conservation organization whose mission is to end the destruction of habitat and slaughter of wildlife in the world’s oceans in order to conserve and protect ecosystems and species.

Whalecraft: a research and educational resource for whaling implements by Thomas G. Lytle.

Whalesite.org: a digital collection containing archived copies of the complete works of William H. Macy and other books about whaling, as well as documents pertaining to the diverse cultures and trades connected by the fishery and its colonial history